The Pirate Code – Article I

“Every man shall have an equal vote in affairs of moment.  He shall have an equal title to the fresh provisions or strong liquors at any time seized, and shall use them at pleasure unless a scarcity may make it necessary for the common good that a retrenchment may be voted.”

The celebrated pirate, Thomas Tew, along with his friends Captain James Misson and an Italian Dominican priest named Caraccioli, founded the legendary pirate haven, Libertalia. According to Captain Charles Johnson’s book, A General History of the Pyrates,  Libertalia was situated on a remote area of Madagascar. Here, pirates, ex-slaves, and other outcasts from society supposedly lived a life of ease in harmony with nature and each other.  Most believe this to be an utter fabrication; however, there is evidence that pirate communities did exist and were organized and operated in a comparatively democratic style.

“None shall game for money either with dice or cards.”

On a pirate ship, the captain and his second-in command, the quartermaster, were generally duly elected.  The treasures were divided according to their rank.  They even had a social net to compensate for disability sustained in action.  A loss of an arm qualified for 600 pieces of eight, while the loss of an eye was valued at 100, and so on. 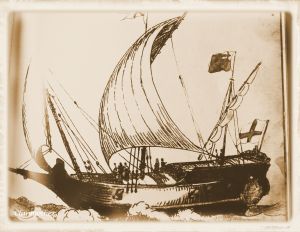 “No man shall talk of breaking up their way of living till each has a share of 1,000.  Every man who shall become a cripple or lose a limb in the service shall have 800 pieces of eight from the common stock for lesser hurts proportionately.”

Pirate recruits, whether willing or not, were required to sign their name or make their mark, as a sign of allegiance and loyalty to their captain. Once signed, the pirate was given a vote as well as a set of rules to follow. Many of these pirate codes were lost when pirates, on the threshold of capture, destroyed them knowing they would be used as evidence against them.  The most famous code was written by Bartholomew Roberts in 1721, which has eleven articles, four of which are included in this post.

“The musicians shall have rest on the Sabbath Day only by right.  On all other days by favour only.”

Even pirates had need of music.