The time has come.  It is the dusk of autumn and winter months.  I watch them from my window, flying towards the east.  At first there are only a few; then they come in random patterns that grow in strength.  It is always the same.  There is a symmetry and dignified elegance to their flight, which is rooted in the inevitability of a long-standing tradition.  Crows are returning to their roost.   Since the 1970’s, an estimated 3,000 – 6,000 crows share a dusk-to-dawn abode that covers the area of about two city blocks in Burnaby, British Columbia.  Forty years ago, trees were more plentiful, but the crows pay no mind to the urban sprawl that has reduced the foliage. This is their place and their numbers do not diminish.  Scientists and bird-watchers are fascinated by the daily migration.

Our generation is not the first to recognize the unusual characteristics of the crows, now believed to be among the world’s most intelligent animals. Over the centuries, crows, with their black plumage and startling caw, have garnered prominence in many myths and legends. In Irish mythology, the war-goddess Badb, takes on the form of a crow and joins her two sisters, Macha and the Morrigan to form the trio of war goddesses known as the Morrígna. The indigenous peoples of the Russian Far East revere Kutkh the raven spirit, appearing in their legends as a mighty shaman and trickster, similar to the indigenous peoples of the Pacific Northwest Coast.  Three-legged crows appear in the mythologies of East Asia where they are thought to inhabit and represent the sun.  In Chinese mythology, the sun crow is called Yangwu.  Japanese mythology considers Yatagarasu, an eight-span crow, as a sign of divine intervention in human activities. In Korean mythology, the three-legged crow is named Samjok-o, a symbol of the sun and great power.

I walk with crows that share the pathway along the Vancouver Seawall.   While they guard their territory with a proprietary determination, they have come to recognize my presence and agree to pose for my camera.  I look forward to our conversations, and suspect that I am at the greater disadvantage.  They seem to understand my language more than I do theirs. There is a bond between us, however. That is, the need for community and belonging.   We seek the company of those we love and feel a kindred bond.    Just as the crows gather in the fading light of a November evening, we look forward to the shelter and safety of homecoming. 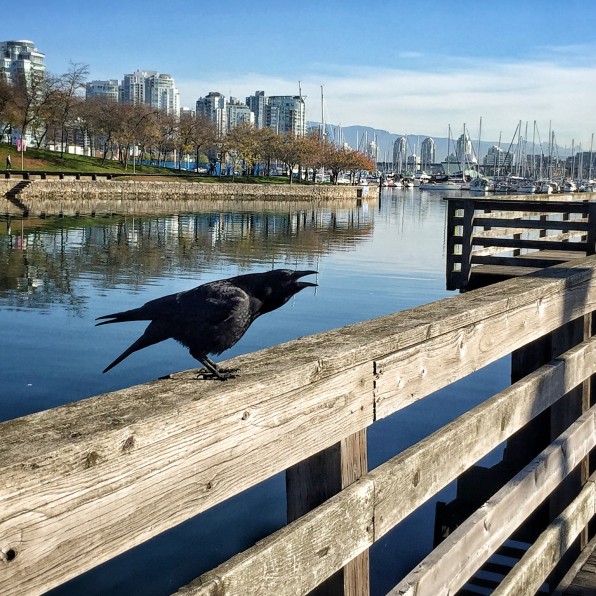 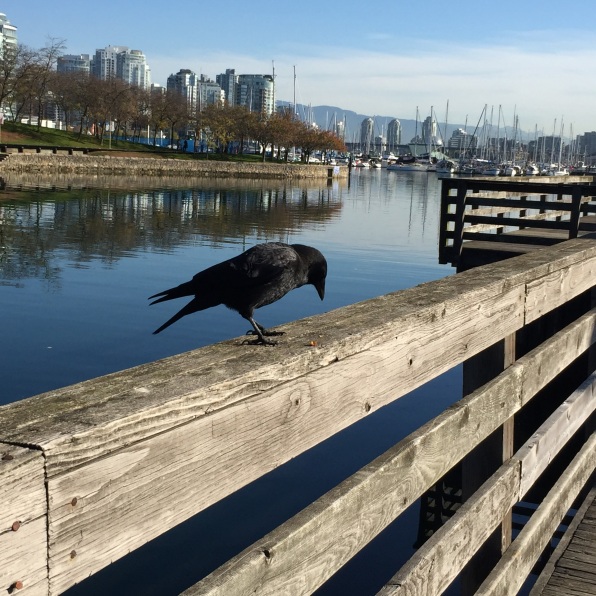