It was as I had imagined is would be – a pastoral setting, with a herd of cows in the forefront of the ruins of Tintern Abbey.  Founded by Walter de Clare, Lord of Chepstow in May 1131, Tintern  (Welsh – Abaty Tyndyrn) is on the Welsh bank of the River Wye.  The Cistercians, known as the White Monks, who lived in the Abbey were adherents to the Rule of St. Benedict, the principles of which were obedience, poverty, chastity, silence, prayer and work.

King Henry VIII’s reign brought about the Dissolution of the Monasteries.  On September 3, 1536, Abbot Wyche surrendered Tintern Abbey and all of its estates to the King.  And so ended a way of life that had lasted for over 400 years. Nevertheless, Tintern remains a gracious testament to survival.  It has outlasted the vagaries of human intervention. Perhaps it is the miraculous statue of the Virgin Mary that stands as a vigilant protector. 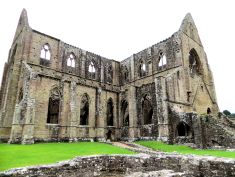 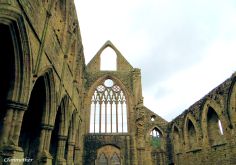 Over the centuries, Tintern has become a place of inspiration.    This visit was no different.  For in the center of the chapel was a young woman reciting the words of William Wordsworth to the solid walls and open skies.  I stood there, a silent listener… END_OF_DOCUMENT_TOKEN_TO_BE_REPLACED