“He came in, and with a pale countenance and faint voice said, ‘We have gained a great Victory’. ‘Never mind your victory,’ I said, “My letters – give me my letters’ –  Capt. Whitby was unable to speak – tears  in his eyes and a deathly paleness over his face made me comprehend him.  I believe I gave one scream and fell back, and for ten hours after I could neither speak nor shed a tear – days have passed on and I know not how they end or begin – nor how I am to bear my future existence.”

Lady Hamilton, in a recollection to Lady Foster

Lord Nelson, before the Battle of Trafalgar, wrote a codicil to his will, leaving everything to Emma and his daughter, Horatia.  He entreated the government, in the event of his death, to arrange for Emma’s financial security. Even, in his final hours, he pleaded for his nation to care for his family.

Lord Nelson fulfilled his duty.  His government did not.

The funeral was the most lavish in British History.  Lord Nelson had requested that Emma sing at his funeral.  They had plans to be buried side by side. Emma was shut out entirely, a foreshadowing of what was to come.  There was no government assistance for either Emma or Horatia, despite Lord Nelson’s sacrifice for his country.  Emma passed away on January 1815, in Calais, France, her daughter at her side.

Horatia lived a long life and found true love with Reverend Philip Ward.  They had ten children, three girls and seven boys.  She lived to see her children grow and find their own way in the world.  Her epitaph includes:

Horatia never publicly revealed or recognized that she was the daughter of Emma Hamilton.  Indeed, over the years, many scholars have marginalized Emma’s relevance in Lord Nelson’s life.  How foolish.

In the end, Emma had the best of all outcomes.  She was loved, passionately and irrevocably by England’s greatest hero. 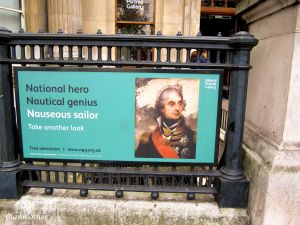 If you are interested in learning more about Lady Hamilton (and there is much more to know) I recommend reading: “England’s Mistress – The Infamous Life of Emma Hamilton” by Kate Williams

“Art is a kind of innate drive that seizes a human being and makes him its instrument. To perform this difficult office it is sometimes necessary for him to sacrifice happiness and everything that makes life worth living for the ordinary human being.” Carl Gustav Jung. #art #sacrifice #humanity #stories
“Have enough courage to trust love one more time and always one more time.”
Thank you for sharing my moment of Zen. Winter is slipping by and Spring is close by, waiting for the earth to awake. I think of Joseph Campbell’s quote as I breathe deeply. “The goal of life is to make your heartbeat match the beat of the universe, to match your nature with Nature.”
But your solitude will be a support and a home for you, even in the midst of very unfamiliar circumstances, and from it you will find all your paths.” Rainer Maria Rilke, Letters to a Young Poet
A message that greeted me at my local grocery store. One word says so much.
Happy New Year! “I come into the peace of wild things who do not tax their lives with forethought of grief...For a time I rest in the grace of the world, and am free.” Wendell Berry
Merry Christmas. Thank you, dear friends for making my day memorable. Looking forward to entering 2021 together. Until then, keep safe and be well.
“Passion is the bridge that takes you from pain to change.” Frida Kahlo